Tronald is hella gnarly and that’s what it always wanted to be.

Crafted from the minds of Andy Preece (Under) and Charlie Seisay, Tronald is almost more experiment than it is music. Horrific soundscapes created by the aforementioned duo, layered with guest vocals; it was an open-ended collaboration, adventuring into the realms of where filthy music could travel.

It’s down to the calibre of the guest vocalists assembled that the project finds its success. Featuring members of The Hyena Kill (Steven Dobb), Boss Keloid (Alex Hurst), Mower (Jared Tuck), Under (Matt Franklin) and Riggots (Martin Battle), as well as samples of a certain orange man from another land, 2017’sTronald [APF006] works because of what each individual voice brings to the table; and what they bring is a pure hellscape nightmare. The sparse, minimalistic instrumentals on top of such divergent voices throughout the EP makes for a surreal walk through a mind split in six.

A rare catch live, due to the insane logistics required to pull off such a collaborative piece, we’re holding out hope for a follow up album, with an even wider cast of conspirators. We know that if we leave Tronald lurking in the background, we’ll hear something else insane some time down the line. 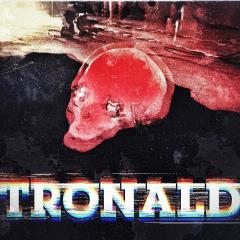