A Chat with Dave Rowlands of PIST

Ahead of the release of our APF Records: The Sound of Heavy 2020 double CD and t-shirt thing on 15th May – which features PIST’s cover of Darkthrone’s Fuck Off And Die - we caught up with frontman Dave Rowlands to see how he’s doing during lockdown. 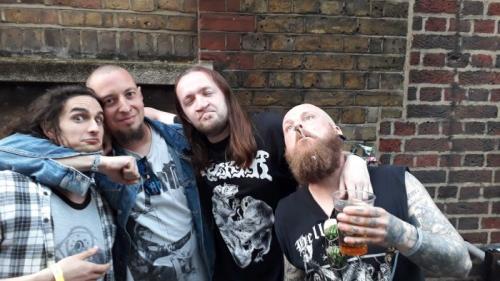 Q: So what you up to then? How you doing?

Dave: I’m having a drink mate. I’ve been at home for seven weeks now. It’s been pretty rubbish man. I’ve ventured to the shop a few times, but not often cos my immune system is crap. John’s been round to my yard for a “social distance beer” but… well… it’s a bit shit isn’t it!

But you gotta do what you’ve gotta do to stop this as soon as we can. As frustrating as this shit is we all want it to fuck off, so we’ve all got to do what we can to help it fuck off. All these people with fuckin bullshit views on it, I’m just listening to what doctors and nurses and scientists are saying about it. People who are on the front line of it mate, seeing it first-hand. Fuck what the government says, they don’t know what they’re talking about half the time. Just stay the fuck inside.

Thank fuck for the internet. But everything’s stopped mate, it’s fucked. Like Liverpool were about to win the fucking first league title in 30 years mate, I was losing my shit Fieldy, I was buzzing. Everything is ruined for me. Liverpool is a huge part of what I’m about man and it’s absolutely devastating. But you know what I mean, there’s a bigger picture obviously, whatever happens happens. It’s such a standard Liverpool thing to happen though haha. And I fucking love Liverpool with all my heart.

Q: What music you been listening to then?

Dave: I’m buying so many records mate. Obviously the new Elephant Tree, I bought Down II cos that was one of my favourite albums when I was younger, fuckin Orange Goblin’s Wolf Bites Back, this German band called Old’s Down With The Nails - that’s great.

I’ve been watching loads of series as well. My brother just got me onto Ray Donovan, that’s well good. There are seven seasons of that. Gangs of London was amazing, I powered that out in a week, that’s brilliant. I’m a fan of Killing Eve as well and the new season of that’s pretty good. 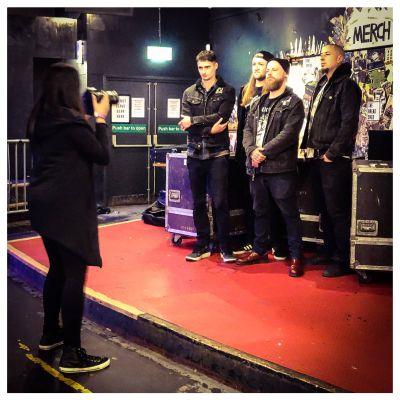 Q: So this APF Records The Sound of Heavy 2020 compilation. Your track on it is a cover version of Darkthrone’s Fuck Off And Die. Tell us about that.

Dave: We’re all big Darkthrone fans. I fuckin love them, they’re probably my favourite black metal band. It’s just a cool fuckin song, an angry song, one of their later ones from a great album. We just wanted to put something extra down when we’d done recording Hailz. We’ve gone into the studio before, done an album, then never had anything recorded to drop in between that album and the next one. This was the last song we did during the Hailz sessions. We practiced it maybe twice, maybe three times. We just hammered it out.

Q: It’s six months since Hailz came out, and a year since you wrote it. How do you look back on that album now?

Dave: I still love it man. It was obviously a bit of a weird time with what happened with Eytan but we had a great time recording it. Shout out to Foel Studio and Chris Fielding for that. It’s defo our best record and shows a progression in our sound. I still don’t personally think we’re quite where I’d like us to be (in terms of sound), and I think that’s the same for the rest of the lads as well, but we’re getting there. It’s a stepping stone record to whatever the fuck’s next.

It’s the first vinyl we’ve had released and, honestly man, this was like fuckin making it for me. From when I was a kid, I just wanted to have a record out and be playing in a band that’s fuckin decent. We’ve got a lot more shit to come though. There’s been riffs flying about during lockdown, John’s come up with something he’s happy with. Of course then posted it all over social media so there’s absolutely no mystique behind that now haha. Before all this shit happened there were three new ones we’d been jamming down at our rehearsal room, and other ideas floating about. I’ve been writing new stuff so hopefully whenever we can get back to the practice room we can get rolling with it. 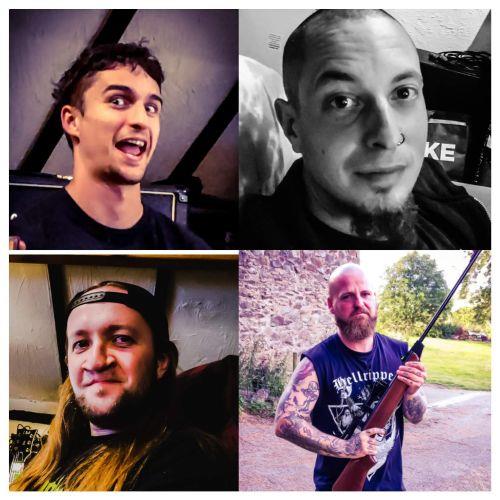 Q: How do you look back on Riffology and Rhythm & Booze now? Still fond of them?

Dave: I love Riffology. It was so rapid, some real whirlwind shit. We’d had like one practice with Hunty and then we were in the studio. It was pretty much songs John had written in his bedroom and we just kinda threw it all together and it was really quick. It got us all back to playing music again. I’d not played in a band for a couple of years and it’s my favourite thing to do. So that was great.

Rhythm & Booze is alright. I dunno. For some reason I’m mad critical about that album. It’s not one of my favourites. We still play a couple of songs from it live. I much prefer the other ones though.

Q: A lot of people maybe don’t know there was music made in between Riffology and Hailz. Care to tell us about that?

Dave: Yeah we scrapped two records haha. We wanted to do an EP, just to break shit up a bit and then do an album. We wrote these four songs, they were alright….. just alright. But then we went in the studio twice – and it didn’t work out. Both the guys who recorded us were mint as fuck, but we weren’t right for each other.

We were recording down at our practice room, and whilst I like that DIY aspect for my other band Drug Vulture, for PIST it was missing Chris Fielding. We would’ve been putting something out that wasn’t as good as we could have done with Chris. It’s just easy and relaxed with him.

Sometimes I can feel a bit of pressure in the studio, I hate it me. I’ll be recording my vocals, in a room shouting into a mic, while them other dickheads are laughing and joking and whatever. But Chris makes it easier. When you’ve nailed it and it’s all done, that’s one of the best feelings in the world. It’s just getting there that’s hard. I like playing live, just screaming my head off. The studio isn’t for me really. 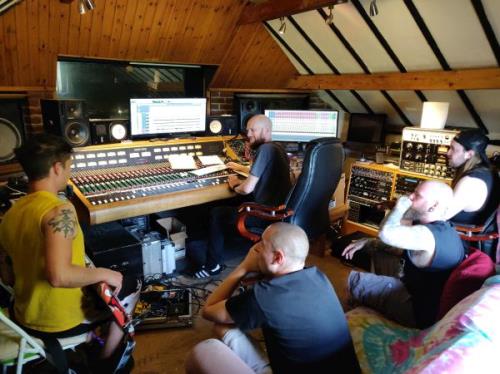 Q: What’s the best PIST song, and why is it Fools Gave Chase?

Dave: Cos I wrote it hahahaha. I love Skin Your God and If I Was You… as well. Good call on Fools Gave Chase though haha.

Q: You’re on a label with 25 other bands. Are there any of your labelmates you have an affinity with, or whose music you love?

Dave: The first that springs to mind is Video Nasties. Good bunch of lads, we’ve partied with them many times, including before Video Nasties when some of them were in Iron Witch or The Bendal Interlude, Siege Mentality and shit. That Video Nasties record is fuckin phenomenal, each of us in PIST own the swanky emerald green one. Obviously the Battalions lads cos we toured with them, and the BongCauldron lads are like our brothers. The Beggar record is great. The label doesn’t release turds, apart from the Diesel King record... hahahah….. nah, just joking. I love Diesel King. I miss Geoff, I miss all of them.

Q: Imagine you’re in lockdown with Pist for several months. What roles would each band member take on, and who would get killed by the others first?

Dave: John would get killed first. I don’t think you need any reasoning behind that hahaha.

Hunty would be the chef. Collins would be the useless, clumsy c**t who breaks shit all the time and forgets stuff. I’ll tidy up, I’ll clean – honestly mate I’d be on top of the washing up. John would go shop and get the alcohol and entertain us with music. Serenade us before we killed him haha. Love that guy.

Q: The world has changed a lot since Eytan (local Mancunian legend and friend of the band and label, to whom Hailz is dedicated) left it. What do you think he’d make of these strange times?

Dave: I think he would be making memes if he was here. He’d think it’s just as crazy and mental as it always was, it’s just another hurdle in life. He lived by a different way of thinking. He would have thrown himself into some other mad project by now. He was just a fuckin good mate, I’d known him since I was 16 years old. He was just like a brother to me. We did some real dumb, messed up shit together, and he did FAR more of that than me haha.

Q: Finally… anything to declare?

Dave: Just fuckin take it easy til all this fuckin crap’s over. I don’t want be a hippy or anything, but stay safe, wash your hands, drink Tyskie and we’ll party when everything’s back to normal.

For more information about (and to pre-order) the APF Records: The Sound of Heavy 2020 compilation or t-shirt, visit https://apfrecords.co.uk/merchandise/apf-records-the-sound-of-heavy