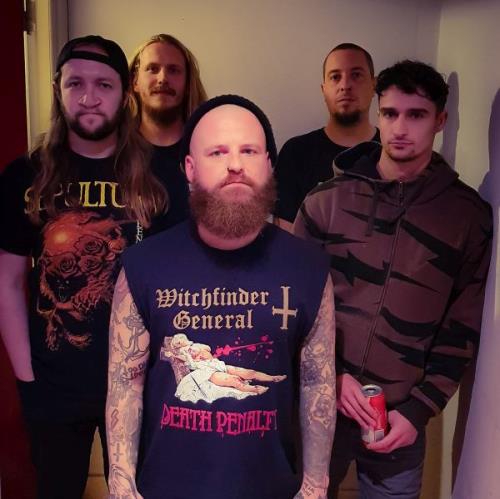 PIST’s Hailz album was a complete and unqualified success. Released on 8th November 2019 it was met with critical acclaim, the band’s fanbase loved it, a whole new legion of music lovers added it to their collections, and it’s thus become one of APF’s biggest sellers. The lads were hoping to go on tour in support of it, but then the pandemic hit. Our Bury boys haven’t rested on their laurels though, adding second guitarist Jack Trelawny to the line-up and writing new material which they will be recording in May. All things being equal you can expect a new PIST album in early 2022.

In the meantime, we caught up with John, Dave, Hunty and Collins to look back on the past and talk about their plans for the future.

APF: Hailz has been out for almost 15 months. How do you look back on it now? With hindsight, do you have favourite tracks (as individuals or collectively)?

John: We’re still really proud of it and how much of a step up it was from the previous album, we almost see it as our first album now, as it was much more of a collaborative effort than the previous releases and we were starting to find our sound. My personal favourite track is Skin Your God, mostly down to the transitions and variation in styles throughout the song.

Dave: I still look back on the record fondly, it will always remind me of our brother Eytan (RIP) who we dedicated the record to. My personal favourites are If I Was You and Skin Your God.

Andy: It’s a weird one for me now. As much as I’m proud of that record and the fact it sent us in a different direction and pushed our musical abilities, I just can’t help but feel this whole lockdown has swallowed that record. It’s strange having put so much work into a record and then not being able to play it live as much as we have done in previous releases. 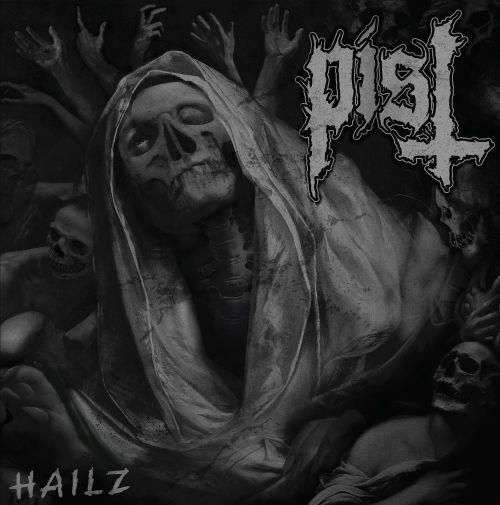 APF: There was a pretty big jump in style between Rhythm and Booze and Hailz. What led to that? Did your tastes in music change, or was there something else behind that move to a darker, black metal-ish vibe?

John: Mostly down to feeling inspired by what we listen to and us trying new things. Between us, we listen to all sorts so it was natural to add that into the music, black metal is something we all listen to, we just tried it and it worked. Plus, I don’t think anyone else is blending that stoner rock groove with black metal. If they are, let me know because I wanna listen to ‘em!

Dave: I always view the records pre-Hailz as demos to be honest. I feel Hailz is a true representation of where we want to take PIST but the best is defo yet to come.

Collins: We’re not trying to do anything at this point. We’ve developed our writing style so it’s at the point where we’re drawing from everything rather than trying to fit a glove. 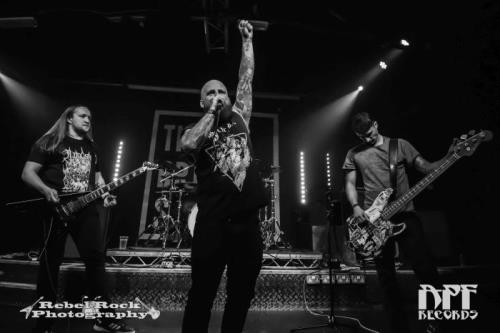 APF: Since we last spoke you’ve added a second guitarist. What was behind the decision to recruit Jack, and what difference has he made to the band’s sound?

John: Again, this came naturally in the end. I’ve thought about having a second guitarist for a while as it gives me a lot more creative freedom without lacking on the live front. Jack was just in the right place at the right time, we were both jamming at Dave’s and it sounded great. A week later he’d learnt most of the set, got him down to the practice room and the rest is history!

Dave: In my opinion it gives us a bigger sound and the opportunity to try different things that would be difficult with just one guitarist.

Collins: It’s freed us up creatively and it’s actually given me the chance to do something different rather than having to play second guitar to keep it full. I wasn’t sure about changing the dynamic initially but it went really easily from the start and Jack fits in well.

APF: Jack mate. For people reading who don’t know much about you, tell us about your musical background and (from your perspective) how you ended up being in PIST?

Jack: I’ve been about on the scene forever me. Playing in various bands in the Manchester scene and being a regular on the gig circuit. I've known the guys for years and was always a fan, I was watching Hunty play drums before Pist were a thing. When the guys were considering a 2nd guitarist the timing just worked out with where i was at in life and we were all in the right place at the right time i guess. Especially with the type of music we all wanted to play. Crazy how it works out sometimes. And despite what John will tell you, partying is a big part of what makes Pist the band we are. To be fair I wouldn't have it any other way!

APF: You’re heading back into the studio in May to record album number three. Tell us about the new material and where PIST is headed next.

John: More of everything. It still has groove and melody but we’ve thrown even more influences into the mix. With the addition of an extra guitar, we can really add stuff to make it more effective and stand out. It’s had input from every member and is a good representation of where the band is currently. It pushed us even further as musicians and I think it’s as much of a step up as Hailz was from Rhythm & Booze, we sound like a much bigger band now in my opinion.

Dave: The next record will be a step up from Hailz, there’ll be more aggression, black, death, thrash, punk kinda stuff but also more melody. It’ll be a journey.

APF: All your releases have been recorded by Chris Fielding. What is it about his method of working that keeps you going back to him?

John: He’s just really easy to work with. He’s patient, his ideas are great and he hears things we don’t, which makes the finished product sound the way it does. He understands us and our sense of humour, and he makes the whole recording process much more enjoyable, relaxed and stress free. 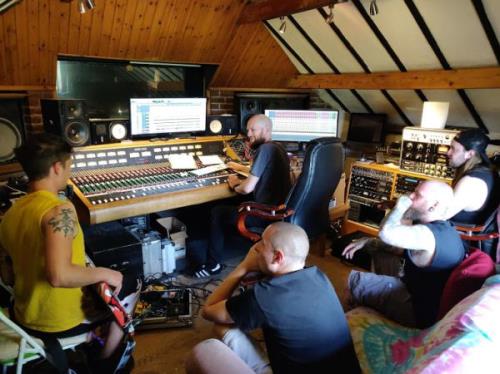 APF: As a band and group of individuals who thrive on playing live and being out and about, the last 10 months will have been challenging for you. How are you holding up, and what’s kept you sane?

Collins: I’ve had enough at this point but I needed a lot of that time away from that playing live aspect of things. I had my third child Oscar last year and as much as I love playing if you’re stressed out and exhausted all the time it stops being what you want to do, so it’s been good to just have family life un-interrupted. I won’t ever stop doing this because I need it, but to be able to take some time off the chaotic side of it and enjoy writing and practise has been a positive - that’s the realest part of it for me. That being said, I’ve definitely got my appetite back for the rest of it.

John: It’s not easy honestly! When you’re used to constant distractions with gigs, different cities and different faces almost every weekend, being stuck in the same place is tough. We’ve used our time wisely though by writing and keeping as busy as we can. Aside from band stuff, we’re all trying to look after ourselves more instead of just getting drunk to pass the time.

Dave: Yeah, it’s been tough. Obviously everyone has their own battles and shit they’ve got to deal with day to day but when you stick a global pandemic on top and you look around and everyone’s struggling and feeling flat it’s pretty bleak. We decided it’d be best to keep moving forward and not just sit on Hailz so we started writing this new record. I think working out has definitely helped in keeping me sane too. We’re just trying to stay focussed and keep our heads above water. Since all this started my record collection has grown considerably, so a bit of retail therapy has helped too.

Andy: It’s definitely helped us write a full new album. We’d otherwise be practicing the set list every week in preparation for gigs we had booked. Aside from the music it’s been tough. It’s been tough on everyone. I’ve been out doing lots of hiking and that’s been great for the mind. The beers took hold at the start of it all so I’ve been trying to reign that in and put my energy into something more productive. 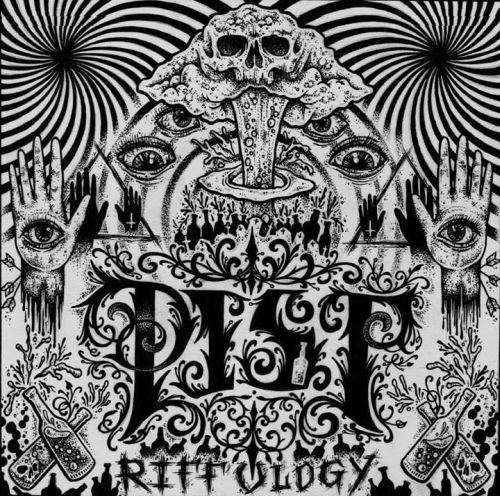 APF: We’re a couple of weeks away from your debut EP Riffology’s seventh anniversary. What’s changed for you as a member of PIST since those early days?

John: We’re nowhere near as drunk or as silly as we were back then. You could say we’ve grown up in once sense without becoming boring. We still have a laugh and enjoy ourselves but it’s a lot more controlled now. Musically we’re in a completely different league.

APF: When you look back on 7 years of playing gigs, which ones stand out for you as your favourites?

John: For me Bloodstock 2015 will always be a highlight, that was before we had even released an album and the most people any of us had ever played to. HRH Doom Vs Stoner was a highlight just because we were tight as fuck and the crowd was mental. Liverpool on tour with Orange Goblin was also great for the same reason, I feel like we couldn’t have played better at them shows.

APF: You’ve managed to stay good mates over the years. A lot of bands are at each other’s throats after 7 years together. What’s been the key to not killing each other (so far)?

John: We’re not soft, we’re all on a similar wavelength and we’re doing this for the same reasons, to have fun. There’s been arguments and disagreements but it’s never something we fall out about. Just move on and progress. We all have a similar sense of humour and can take the piss out of each other without anyone getting upset.

Dave: We’re mates first and foremost and that’s not changed, we hang out aside from PIST. We all share a love for what we do and all have a pretty warped sense of humour so it just works. 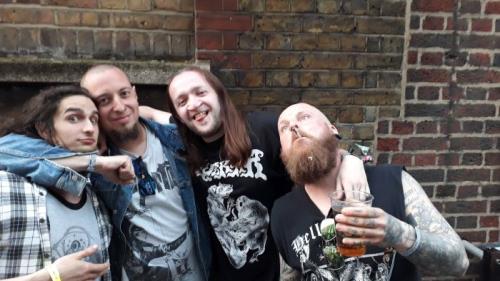 APF: You had Jack and Pete from Elephant Tree do backing vocals on Strangle The Sun on Hailz. Fantasy time: if you could have any artist make a guest appear on a PIST album, who would it be?

John: For me, I’d love to have Max Cavalera do some guest vocals, I’ve loved Sepultura since I was very young and I listen to them almost daily now. He’s a legend and has an incredibly distinct voice that works well over crushing riffs.

Dave: It would’ve been Lemmy but if I’m picking someone’s who’s still with us, I’d go for Ozzy.

APF: Final question. Does Jack know what he’s let himself in for yet?

Collins: He’s here so probably not.

John: He’s fit right in. I don’t think we’re as insane as people make us out to be, although he’s not seen us in a touring environment yet. 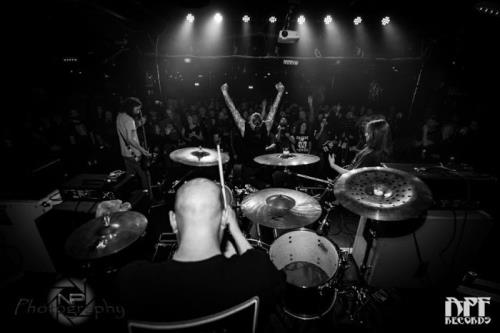