It’s nine months since BongCauldron said farewell with a final, stonking, amazing set on the Sophie Lancaster Stage at Bloodstock Open Air 2019. Our APF Records: The Sound of Heavy 2020 compilation – out on 15th May – includes a live version of I’ve Been Sick, which they only ever played a couple of times. We caught up with Biscuit, Jay and Corky ahead of its release in what might well be their final interview? Only time will tell. 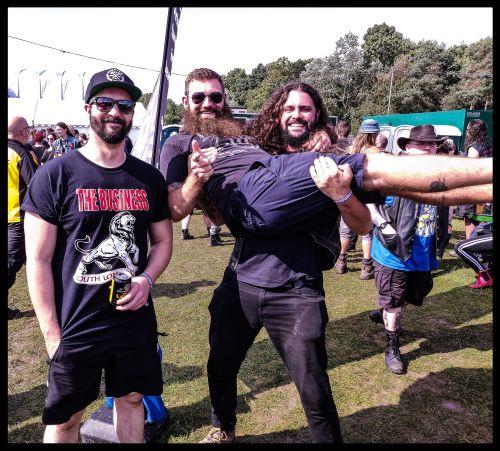 Q: Your track on the APF compilation is a live version of I’ve Been Sick, recorded when you supported The Obsessed in Manchester. Who wrote that song and what inspired it?

Biscuit - Think Jay wrote that, it might have been in memory of the time he ate a pizza from Flames in Leeds and puked so hard he got black eyes.

Jay - I still went back after! I sent the lads the intro, verse riff and lyrics if I remember right. Got stuck on the lyrics trying to find something to come after "Face down in the black, Cold and rotten...". Think it was Corky that replied with "return of the mack". It stuck. The song was about nothing really. We spent so long tied down with Binge and that record was fucking miserable for me. I've Been Sick was written at the same time as Scrubber Cider so it was just us having a laugh.

Q: The original version was released to coincide with your final Riff Fest performance. What are your recollections of writing and recording it, and of that Riff Fest experience?

Biscuit – Riff Fest was great but they had a barrier so it was a much safer affair than last time we played, bit of a let-down.

Corky - If I remember rightly the writing and recording was pretty quick and painless. For me the atmosphere at Riff Fest wasn't as good as the first time, but that may have been because I seemed to be the only person there not drinking.

Jay - Man the night before we recorded Scrubber and I’ve Been Sick, me and Biscuit went down The Parish in Huddersfield and got leathered. About 1am we call it a night, I lay down in bed, spinning like mad. Up again, leg it to the bog, give it a big scream spew. Ask Biscuit if he wants to go for walk, he doesn’t but he comes anyway. I fall down a hill, and get muddy and piss wet through. We end up finding this horse called Callum, he belonged to some nutter up on the estate.

From out of the dark comes a woman with her torch saying she’s lost her child, have we seen it? It’s now probably about 2:30am, there’s a child missing, and we've just been found in a field having a chat with a horse called Callum, Biscuit looks like he doesn’t want to be there, and I'm pale and covered in mud.

So, I felt fucking horrendous while recording. 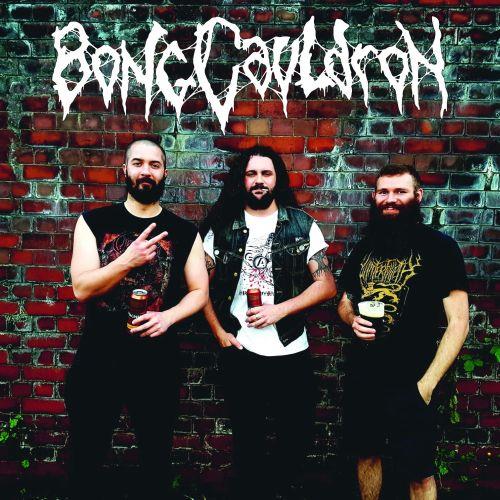 Q: You released the magnificent Tyke and played some decent shows in your final year together: HRH Doom vs Stoner and supporting Eyehategod in Bristol amongst others. Did you enjoy that period of time and those gigs? Or were you already thinking about calling it a day?

Biscuit - Tyke is easily my favourite thing we ever released. When we wrote it, we got back into the headspace we had when we first got the band going and just had a right laugh. It’s always been a great time playing in Bongers and I never wanted the band to end, but unfortunately I was juggling too many things to give it my all and we had to call it quits (for now).

Corky - By this point I was already getting tired of having to drive in and out of gigs because of work, so even though the gigs themselves were really good and getting bigger, I was enjoying the whole experience a bit less.

Jay - I'd have to agree with Biscuit, Tyke was our best stuff. Felt like we'd gone right back to the first EP. HRH was decent on the main stage but it was better when we played the club room. Big stages are fun to play, but only because it’s a big stage. The smaller rooms where its constantly kicking off are better. We'd each been toying with the idea of knocking it on the head for a while. Life happens.

Q: Biscuit. Bloodstock 2019. How was that day for you? Do you remember much about being on stage or did it pass in a blur?

Biscuit - What a gig. I can barely remember anything from actually playing it. I remember Corky lobbing gravy into the crowd, a decent pit for Bigfoot and obviously Fieldy getting behind the drums. I had so much adrenaline coming off stage I just threw up the minute we got off. It’s funny because not long after that gig I finally went to get my chest looked at because I'd had trouble breathing and coughing and eventually got diagnosed with this fucked up rare disease, so technically I was the illest I’ve ever been during the best time of my life.

Q: Biscuit again – the other two have War After War going on now. What have you been up to since that final Bongers show?

Biscuit - Initially after Bloodstock I spent a lot more time out on the mountains with my girlfriend and got to focus on my Arboriculture work and research. I've also been working on a music project which hopefully will be announced during the summer, so look out for some country blues sludge trash.

Q: It’s five years since the infamous Gurt, Bongers, Pist tour, the last big set of dates you did. Do you miss those days, or are you glad they’re behind you?

Biscuit - 'Kin hell has it been 5 years? I still miss it a lot and will no doubt live them times again.

Corky - Both in equal measure.

Jay - I miss them days. I’d do that tour again in a fucking heartbeat if I knew I could hack it. There was only one point in that whole tour where I genuinely believed I'd completely fucked it. And that was in Edinburgh when I was gifted some birthday medicine by a top lad who's name rhymes with "ruin". I thought I was going to die. 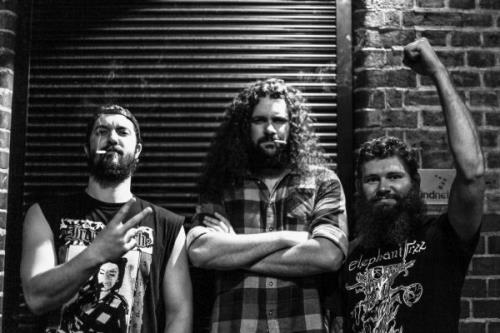 (Photo by and used courtesy of John White)

Q: What’s the best Bongers track, and why is it Jezus Throat Horns?

Biscuit – You’ve obviously never heard Moss Covered Leviathan. One of the first songs we ever wrote, it was 1 note.

Jay - I honestly couldn’t pick a favourite. It varied from gig to gig. There’s something with Bongers where when we all lock in together its fucking mega. I suppose that’s what well-rehearsed bands feel like all the time!

Q: When you look back on your catalogue, which songs are you most happy with and proud of? Are there any you wish you’d never let out into the world?

Biscuit - Scrubber Cider is still my favourite Bongers tune. I think it encapsulates everything we are about. It’s got speed, groove, aggression, daft lyrics, its spot on. Hopeless was always the song I was most unhappy with but I heard it recently and its pretty good actually. So other than that fuckin solo on Gauze Rite I’m pretty happy with what we put out.

Corky - I'm proud of everything we did and I still listen back now and then. Even if I wasn't sure about a track at first, it would always come out well on recording.

Jay - The only thing I’m not happy with is my snare drum sound on Swamp Law and Acid Cattle. I was trying to be clever and "technical" with my drums when doing that recording session. I realised after that I just need to stick to twatting them.

Q: Similarly, how do you look back on the sound of your albums? Bongers were a bit like Nirvana: you got the rowdy Bleach one (the EP), the polished Nevermind one (Binge), and the back-to-your-roots In Utero one (Tyke). Do you have any comment on that?

Corky - Binge is sonically great, but the production of the EPs suits our style more. Tyke is my favourite in terms of the final product.

Jay - The rawer recordings sound better to me. Recording with Chris Fielding at Skyhammer was awesome, but I think we only did it because everyone else was doing it. Skyhammer had a bit of an awe round it at that point. Some bands suit that polished sound, I don’t think we did. 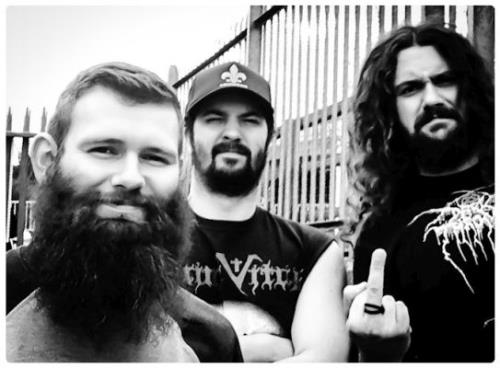 Q: I, and many others, think you should have been much bigger than you were. If you’d broken through do you think you could have handled the success, or would it have caused problems for you as a band or as individuals?

Biscuit - Who knows. I've never really thought about it other than the occasional drunken chat about “one day man we'll play Roadburn”. I always like the way we did things, never pushing for more or arse licking to one up other bands. We earned everything we achieved.

Jay - I mean when you say success, we'd have still been going to work Monday morning! There was a time around 2014 where we should have leathered it and taken it seriously, I reckon we could have got reasonably far. But we didn’t cos we were happy with beers, weed, chicken and a laugh. That times been and gone now. I don’t mind. But Roadburn is still on the fucking list!

Q: Do you miss BongCauldron being active these days? Or was it the right time to down tools?

Corky - I miss it, but that doesn't mean it wasn't the right time. We all had other things going on and were living too far apart to make any realistic plans.

Jay - I miss it but we all pretty much accepted that normal life always comes first, and as you come out of your 20s in to your 30s I think normal life starts to dominate.

Q: Finally, now that Bongers isn’t a thing any more…. Has the infamous Curse Of BongCauldron left you alone now, or are you still unlucky?

Biscuit - Well, we are in a pandemic aren’t we. You're welcome.

Jay - We'll be alright, as long as we maintain social distancing.

For more information about (and to pre-order) the APF Records: The Sound of Heavy 2020 compilation or t-shirt, visit: