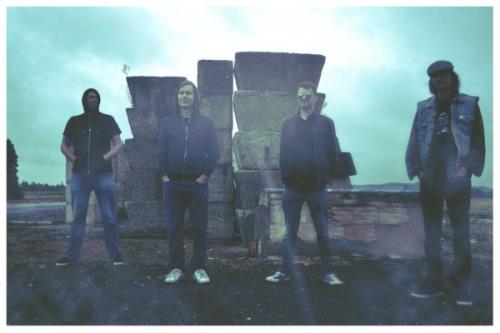 Indica Blues signed to APF Records in July of this year. Over the previous year or so one of their huge fans, a certain Mr Hoenikker, had kept on nudging us to check them out. The lads in Desert Storm had mentioned Indica Blues were a band who would fit like a glove on APF. We quite liked what the band had done on their previous releases, with the track ‘Reigns End’ becoming a particular firm favourite.

In June Indica Blues emerged from the studio having recorded a new album with Steve ‘Geezer’ Watkins, who had done wonders in the past for both Desert Storm and The Grand Mal. I asked to hear it. It was one of those rare moments, where you press play on something new and 40 minutes later you are just floored. I listened to the whole album more than ten times in quick succession and my love for it just grew and grew, to the point where I felt sick at the thought of any other label releasing it. When I contacted the band to ask if APF could sign them I had to try hard not to beg…

That new album is called ‘We Are Doomed’, and it’s being released on APF Records in January 2021. For those familiar with Indica Blues already, you should know that the Oxonian quartet has absolutely smashed it out of the park this time round. It’s got the things you know and love about the band already, but with everything turned up several notches: the songwriting, those earworm riffs, the performances, the sheer sonic power. It bristles with vim and energy. It sounds like a hundred million dollars. A band reborn.

You’ll be hearing something from ‘We Are Doomed’ next month. In the meantime, we caught up with Tom Pilsworth for his first interview since the band joined our roster. 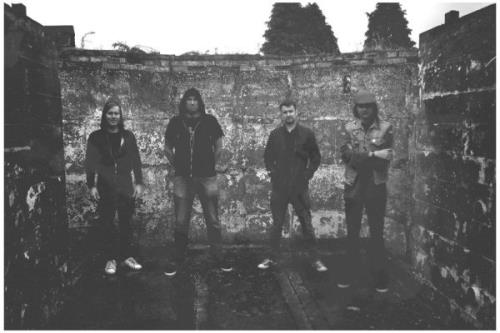 All photos by Matt Peake

Q: You’re one of APF’s newest signings. For those of our followers who are unfamiliar with Indica Blues, how would you describe yourselves as a band?

Tom: We call our music Psychedelic Doom. We are four unpretentious guys who love to jam and make heavy music together. We bring an element of surprise - when we get on stage, I don’t think people expect to be hit with 10-minute songs layered with multiple riffs, FX-laden solos and ear-splitting volume. We’ve lurked in the basement of the underground scene for a while now, but those that find us generally stick around. We’re excited to reach a whole new bunch of people through being on APF.

Q: Your first release on Bandcamp was the 2014 Towers Rising EP. Tell us about how Indica Blues began and how you got to that first release.

Tom: That first EP was a solo record, recorded at home in a damp little box room stuffed with wires and mics, with Zdzisław Beksiński posters on the wall for inspiration. For a long time, I’d wanted to play music like Kyuss, Electric Wizard etc. but the band I was in wasn’t going anywhere. Around this time, I met John (Slaymarker – guitar) at a gig, and saw his band Caravan of Whores. They blew me away; these huge riffs, and monster jams. I thought to myself “that’s the kind of band I want to be in”. I realized the only way to start something like that was to do it myself.

The first track I recorded for ‘Towers Rising’ was ‘Elephant Skull’ and I was trying to recreate what I heard during those Caravan of Whores gigs - these massive, fuzzed up riffs and John’s signature psychedelic, FX-laden solos. But of course, when you do that, try as you might to copy something, you end up with something different… and that’s where the Indica Blues sound started to develop from.

Shortly after I put that record out to some mild local acclaim in Oxford, Caravan of Whores split up. Me and John got chatting, had a couple of jams, and we came to the conclusion we should setup a band under the Indica Blues name. He brought in his riffs and I wrote lyrics to them, the first being Wasted Landscapes. That formula still produces some of our best tracks. We recruited Andy Haines-Villalta on bass and our previous drummer Ed Glenn, and things got rolling quickly - within a few months we supported Elder!

Towers Rising has been far surpassed by what we’ve done as a band, but it helped set the tone and style of Indica Blues. 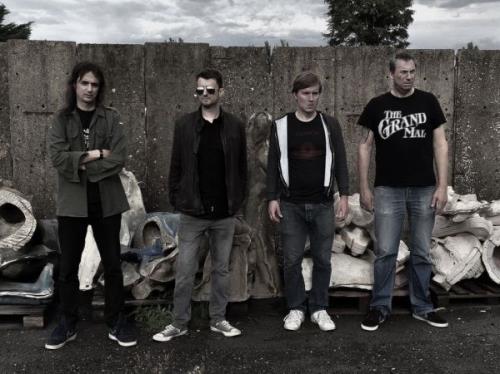 Q: Your two albums (2016’s Ruins on the Shore and 2018’s Hymns For A Dying Realm) were self-released, to critical acclaim. Why sign with a record label now? How do you look back on those two records with hindsight?

Tom: We came to the conclusion if we wanted to reach more people and take the band further, we really needed label support. As time goes on, the genre just gets more and more saturated. So, it’s not enough to rely on some YouTube algorithm to make you popular, you need support and to collaborate with other people. Signing with APF provides us with the opportunity to do just that.

‘Ruins on the Shore’ was a great record. We were really surprised by the reaction it got. Ed Glenn was our drummer at the time and he is a huge Metallica fan, so it is definitely our most ‘metal’ release. The opening seconds of the first track really grab your attention. But our songwriting and playing has come a long way since then.

A lot changed between ‘Ruins…’ and ‘Hymns for a Dying Realm’, our first full length record. The UK was turned on its head by Brexit, Ed left to concentrate on family and we recruited Rich Walker on drums. His free flowing, old school style allowed us to explore some other influences, particularly proper doom - Candlemass, Saint Vitus etc. We wanted to bring that side of our writing out as much as possible on that record. ‘Hymns…’ is very consistent in its atmosphere and sound, helped by Chris Fielding’s Skyhammer Studio pristine mixing. I think the end of ‘Psychedelic Haze’ is one of the best things we’ve ever recorded. But I don’t think there’s any doubt ‘We Are Doomed’ is our strongest record yet.

Q: Your forthcoming album We Are Doomed is so strong that you could have picked and choosed which label you signed with. What was it about APF that secured your signatures?

Tom: APF has a reputation for being hugely supportive of its bands, and being completely transparent in the way it works with them. Our experience so far tells us that reputation is very much deserved.

Q: Do you have a particular affinity with any of the other bands on APF, either through being mates or just because you dig their riffs?

Tom: We have a lot of love and respect for Ryan and Elliot Cole of Desert Storm. They pretty much single handedly built a scene for us to play in, in Oxford. Without the gigs they put on, Indica Blues wouldn’t exist. They are also an incredible act - we’ve been going to their gigs for years now and they still get better every time.

We seriously dig the new The Brothers Keg record too. 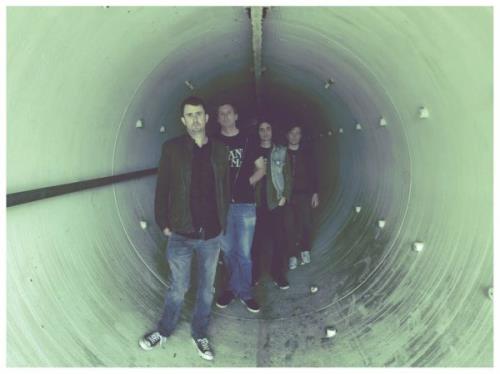 Q: We Are Doomed is a monster. Tell us about the writing and recording of it, and what your fans can expect from it.

Tom: We took the same approach we always take with writing; usually we jam some riffs out, or someone brings in an idea, then after we’ve tried it out a few times I’ll write lyrics and put a structure together.

There is something very organic about the way the process happens. I honestly don’t think we intended to create another full album, we thought we’d maybe do a four track EP, but once you get started, you get pulled in, the pressure builds and you find yourselves working really hard to get as many tracks done as possible. The last track ‘Scarred for Life’ was written about 3 weeks before we went into the studio and, somehow, we got it in there.

It was John who suggested we record with Steve ‘Geezer’ Watkins, who also recorded albums for our label mates Desert Storm and The Grand Mal. I must admit, as he was local and we weren’t travelling far this time, or staying over somewhere, I thought this might be an easier album to record. Actually, Geezer probably pushed us far harder than anyone else to get the best takes and also had a completely different approach to recording to what we used previously. Each track was laid down by the whole band live, then we would add layers on top, perfecting everything. There was no metronome involved, no drum replacement/quantizing etc. The result is an album which is absolutely true to our live sound… the first time we’ve achieved that on record. But although it has that live energy, every single element you hear was probably refined at least six or seven times.

All the work was done at Wormwood studios, built in an old cottage deep in the Oxfordshire countryside. Tony Iommi had recorded some parts there - there were pictures of him on the walls. It also had the largest collection of lava lamps you’ve ever seen, so when things were going well Steve would stick a few on.

It was a huge amount of work. But it must have been worth it, as it got us signed to APF! 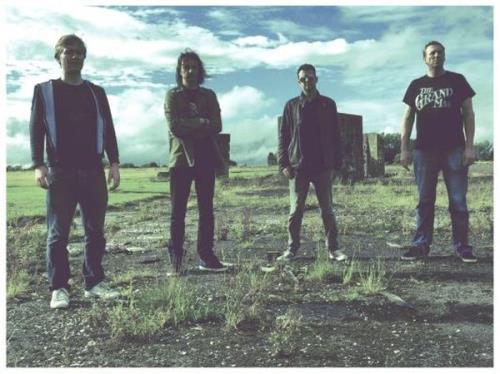 Q: There is a lot more “dirt under the finger nails” on this album, particularly in the guitars. Was there a conscious decision to get a bit more gnarly? And if so, what informed that decision?

Tom: That’s the band’s true sound coming through. Both John and Andy have always used a lot of fuzz. I think on previous records the engineers have perhaps softened our sound a little, or cleaned it up a bit. But Geezer was very much all about capturing our sounds and tones the way they are.

Q: You will have written the lyrics to the title track before the current pandemic, but they seem more apt now than ever. It feels like we’re going to hell in a hand basket. What’s your take on where we are at in 2020?

When I wrote ‘We Are Doomed’ it was around the time chemical weapons were used in Salisbury, where our drummer Rich grew up. The lyrics are an answer to these questions: what if everything that is happening now, all these insane world events that seem to increase in frequency and severity every week, are leading up to a nuclear war? And what would that look like?

As we were recording it, COVID-19 happened.  And driving back in the early hours of the morning through foggy country lanes, with all this shit kicking off, I found myself thinking; are we actually going to get this album out before there’s some sort of civilizational collapse? It was a genuine worry. Still is. We are in frightening times, there’s no two ways about it. And because we consume news through our phones now, it’s very hard to switch off - the apocalypse is playing out right there in your hand, live.

But every generation thinks they are doomed, I’m sure.

Q: How have you kept yourselves busy since the shit hit the fan in March?

Tom: We’ve been sorting out mastering, artwork, and videos for ‘We Are Doomed’ - it’s been good to have a project to work on during all of this!

Q: Finally, any message for the APF heads reading this?

Tom: Thank you for supporting APF and its roster. Without people like you buying music, bands like us simply wouldn't exist.  And in the post pandemic world, you will be the ones that help rebuild the music scene. See you 2021.